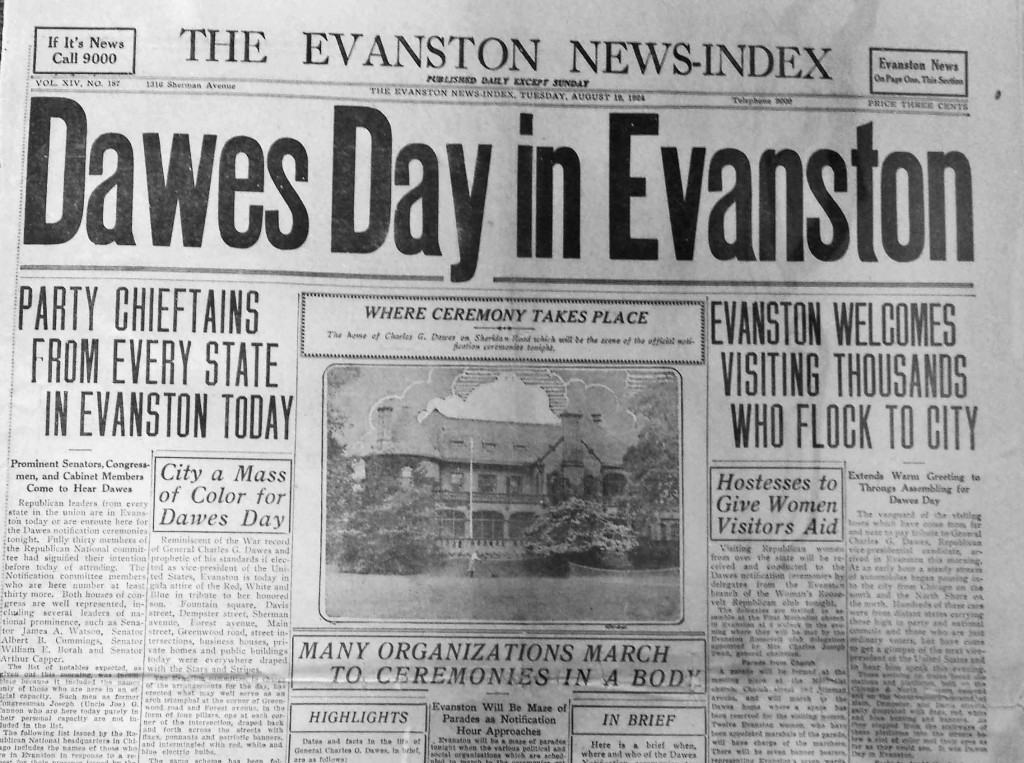 As EHC gets set to launch the “Year of Dawes,” we remember another official launch that took place on this date in 1924. Tuesday, August 19, 1924 was “Dawes Day,” a day when Evanston became “the center of the United States for one evening.” On the grounds of the Dawes House at 225 Greenwood, 30,000 people gathered for the official “notification ceremonies” during which Charles Gates Dawes formally accepted the nomination for vice president by the Republican party for the 1924 presidential campaign.

In the days preceding the formal ceremony, an estimated 100,000 visitors flocked to Evanston, (including Dawes’ close friend, General John Pershing, along with senators, congressmen, and Republican party leaders).

The New York Times observed that “Evanston is leaving nothing undone to celebrate the honor which Dawes’s nomination brought to the North Shore suburb.” Flags, bunting, and pictures of Dawes were everywhere, and the city was “decorated in a manner that would do honor to a conquering hero returning victorious from the wars.” On Main, Dempster, and Davis streets “huge white pillars” were erected to “magnify the decorative scheme.”

Chicago loaned 125 policemen to help with the massive crowds. (Four pickpockets were arrested that night.) Streets were closed and no cars were permitted east of Chicago Avenue or north of Dempster. Michigan, Forest, and Judson avenues had been set aside for “parking purposes exclusively.” 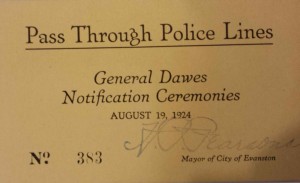 Citizen parades marched prior to the ceremony. Meanwhile, the Dawes hosted a dinner at their home for 100 guests.

At 7:30 pm the grounds of Dawes house were “thrown open” to the public, with ushers on hand to assist. A special “information office” had been established across the street from the house on Greenwood. Special lights had been set up to illuminate the proceedings, which officially began at 8 pm with the singing of “America.” Fourteen radio stations broadcast the event, and listeners as far away as New York City, Boston, and St. Louis tuned in. (Two Chicago stations also broadcast the event.) “The words came over distinctly,” according one newspaper report, and “the listeners lost nothing that was said.”

From his home in Plymouth, VT, Calvin Coolidge was also listening. He even stayed up past his bedtime to hear his running mate’s speech.

Soon the two men would hit the campaign trail. 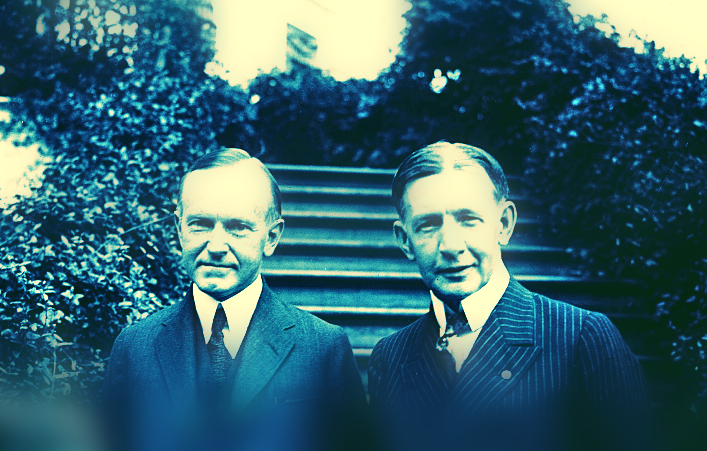