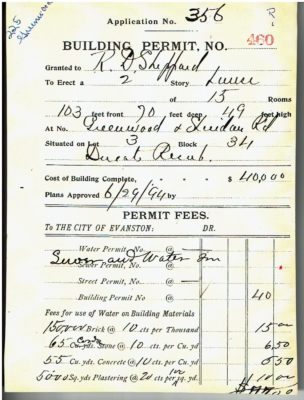 We are celebrating the 125th Anniversary of the home of the Evanston History Center: The Charles Gates Dawes House. The building permit for the house was issued on June 29, 1894, to Rev. Robert Dickinson Sheppard. Building permits were relatively new to Evanston, having been instituted in 1892 when the city form of government was adopted. The number indicates this was the 460th building permit issued.  Permits can provide valuable information about planned construction. This permit calls for a 2-story, 15 room house building materials valued at $40,000.

Planning for the house had begun in the booming economy of the late 1880s and early 1890s, before the huge financial recession of 1893. Plans for the house would undergo many revisions as the economy retracted. However, the final product is still much grander than the information on the permit indicates.

Sheppard was a wealthy Methodist minister who had graduated from Garrett Theological Seminary in Evanston and returned to teach at Northwestern University. He also held a position on the board of trustees and was the business manager. He was considered a strong candidate for the presidency of the university, and was likely building a house suitable to his goals and aspirations.

The house is designed in the chateauesque style, modeled after chateaux in the Loire Valley of France. The interiors have intricate plaster ceilings and wood carvings in a variety of styles, including Jacobean – or Scottish Medieval – a reference to Robert Sheppard’s ancestry.

The architect the Sheppards chose was Henry Edwards Ficken. Born in England, he was educated in Scotland, studied art in Europe, and moved to New York in 1869. 9.(1) He began as an artist and then became a draftsman and an architect. His work was reflective of his artistry and his background.

The client influences and directs the architect’s design. Virginia Loring Sheppard, Dr. Sheppard’s wife, also played a crucial role in the composition of the house.

“She was a master builder. Her beautiful house was her own thought, her own creation, the work of many years before a stone was laid. Each nook of the house contained some precious sentiment and held for her some sweet thought. She loved her home and her home life with an intensity which even those dearest to her could scarcely understand.”(2)

The house took two years to build. The family moved into the new house in 1896 and lived there until 1909 when they sold it to Charles and Caro Dawes. Visit the Evanston History Center at the Charles Gates Dawes House for a guided tour. Enjoy all the intricate details and craftsmanship of the house and learn about the families who called it home. We are open for tours Thursdays – Sundays, tours are on the hour at 1:00, 2:00, and 3:00 ($10 per person, EHC members free). In celebration of the anniversary, we have a special exhibit of some of the original blueprints, showing the evolution of the design.