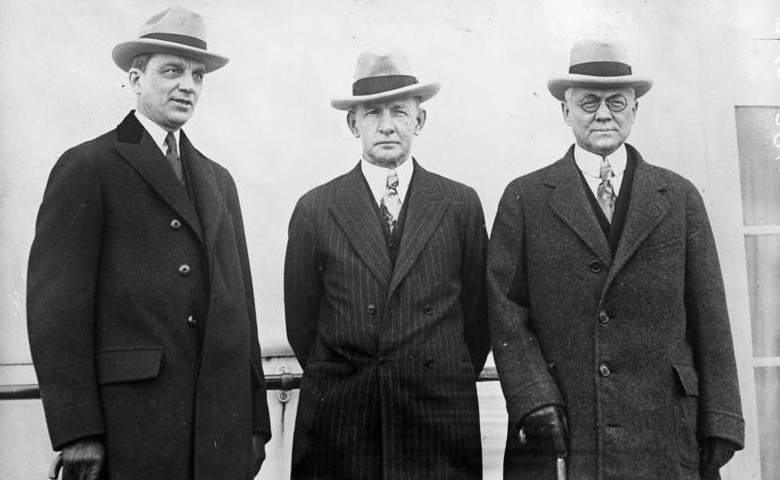 1775 William Dawes rides from Boston to Concord to arouse the Colonists.

1896 Dawes manages finances for William McKinley presidential campaign in Illinois; after the election he is appointed Comptroller of the Currency, serving until 1901.

1901 September 5 – 13, Assassination, illness, death of Pres. McKinley with Dawes at his bedside.

1908 Incorporation of Dawes Brothers Inc. with brothers Henry, Rufus and Beman. December. Sets up a bread wagon under Malcolm MacDowell to feed the unemployed migrant workers in Chicago. Later, gets Medill McCormack of the Tribune to organize a larger operation. Continues to run own wagon secretly when need arises, in 1910-12.

1918 April, Dawes has idea for Military Board of Allied Supply to coordinate efforts; Pershing appoints Dawes head of American operations.

1921 Dawes testifies before the House Committee on War Expenditures; his frustration with them breaks out in “Helen Maria,” captured in the press as “Hell and Maria”. March, Pres. Harding appoints Dawes to War Risk Board to recommend care of WWI veterans; Dawes prohibits all social functions, completes committee business in three days. June, Congress passes Budget Act and Pres. Harding appoints Dawes Director.

1923 April, Dawes forms the Minute Men of the Constitution to fight crime. Evanston company is the first to be established; within six weeks it has 6,000 members. Death of Pres. Warren G. Harding.

1929 March 3, Presentation of silver tray from Senators upon completion of term as Vice-President. Appointed by Pres. Hoover to chair Dominican Economic Commission to install efficient budget system there. April, Appointed by Pres. Hoover as Ambassador to the Court of St. James. Raised over $10 million worth of bonds in Chicago to support Century of Progress exhibition.

1942 Charles and Caro arrange to give (after their deaths) their home and shares of Commonwealth Edison stock to help maintain it to Northwestern University with stipulation that the Evanston Historical Society use it.

1951 February 21, R.F.C. loan and interest fully repaid. April 23, Charles Gates Dawes dies in his library at home after spending the morning at the City National Bank and Trust Co.