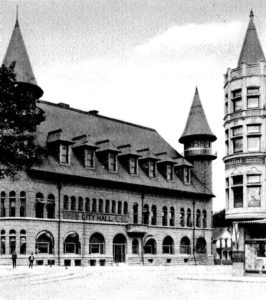 In April 1918, there were a lot of things to fear. The First World War, now in its fourth devastating year, was reaching a critical level for the United States. In the year since the country declared war against Germany in April 1917, the U.S. armed forces had grown to over four million, with nearly three million deployed overseas; Across the United States people faced economic uncertainty as they were challenged by the upheavals of a country devoted to a global war.

To top it off, an epidemic was announced: whooping cough was on the loose in Evanston.

Looking back at this era, we have the benefit of hindsight.

As we know, influenza, not whooping cough, would reach pandemic proportions beginning in 1918. Before it ran its course, finally losing strength in 1920, influenza would claim an estimated 675,000 lives in the United States and 20-50 million lives worldwide. (Numbers are from U.S. Centers for Disease Control.)

Those were truly dark days. In 2020, as we face another pandemic, looking back at this time might help us see that cold, gray days have come before. They have also passed, eventually becoming history. And now, knowing that history seems somehow urgent.

Unearthing a detailed portrait of Evanston’s experience of the 1918 pandemic, however, is not so easy. In the immediate aftermath of that terrible time, forgetting was the order of the day. But more on that at the end of the story.