In an effort to mark the centennial of the United States Entry into World War I, the Evanston History Center is publishing a series of profiles and essays documenting aspects related to Evanston’s role in the war.

After the U.S. declared war against Germany on April 6, 1917, and entered World War I, many Evanston residents rallied to the colors or heeded calls for service in nursing, Red Cross work, and numerous other war-related roles. From the famous (future Vice President of the U.S. Charles Gates Dawes) to the civic minded, William “Billy” Levere, to the young and unknown, the residents of Evanston would serve. A military force of four million men and many tens of thousands of civilian workers would ultimately be created, and its members would find themselves far from home, deployed across the country and overseas in camps, hospitals, canteens, and bases, and also on the front lines. 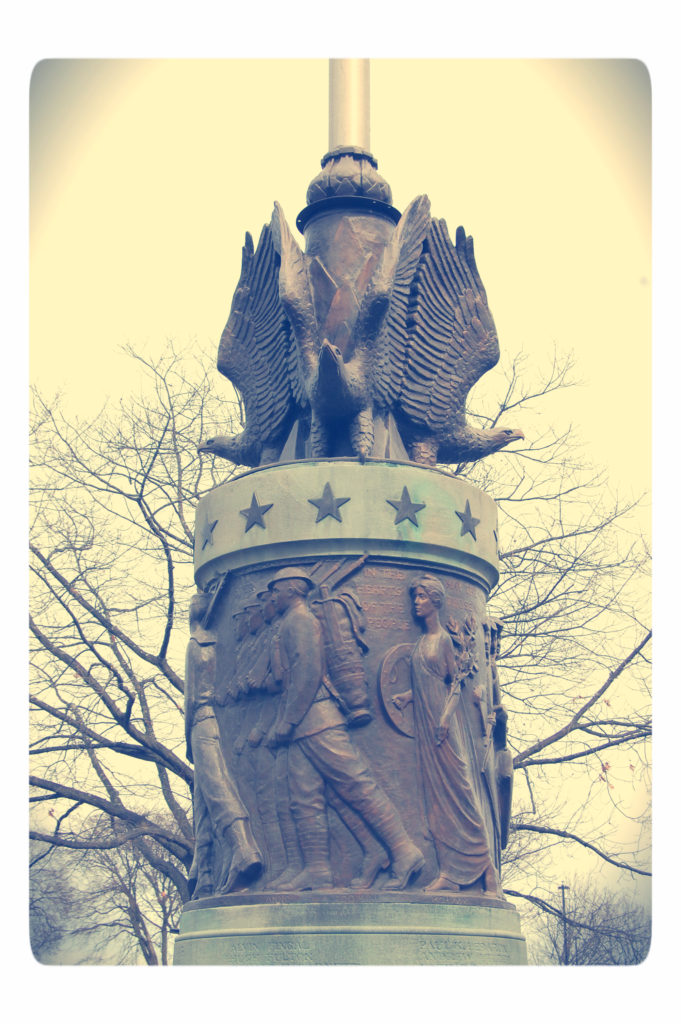 The Evanston War Memorial (1929), Patriots Park, Evanston, IL. Stephen Beames, sculptor. A gift of the Fort Dearborn Chapter of the Daughters of the American Revolution.

They were born in Evanston. In Chicago. In South Carolina. In Scotland. In Sweden.

The oldest among them was 31 when he died.

Some dropped out of Ivy League colleges to join the military. Some never attended high school.

These were the men and women of Evanston who died in World War I.

Run your fingers across the cool surface where their names are engraved at the base of the memorial. Their names, imprinted there, signify the lives of those gone nearly a century ago.

One hundred years ago, they embarked on a tremendous mission, to serve, to fight.

Who are they? How did they die? Are they remembered? 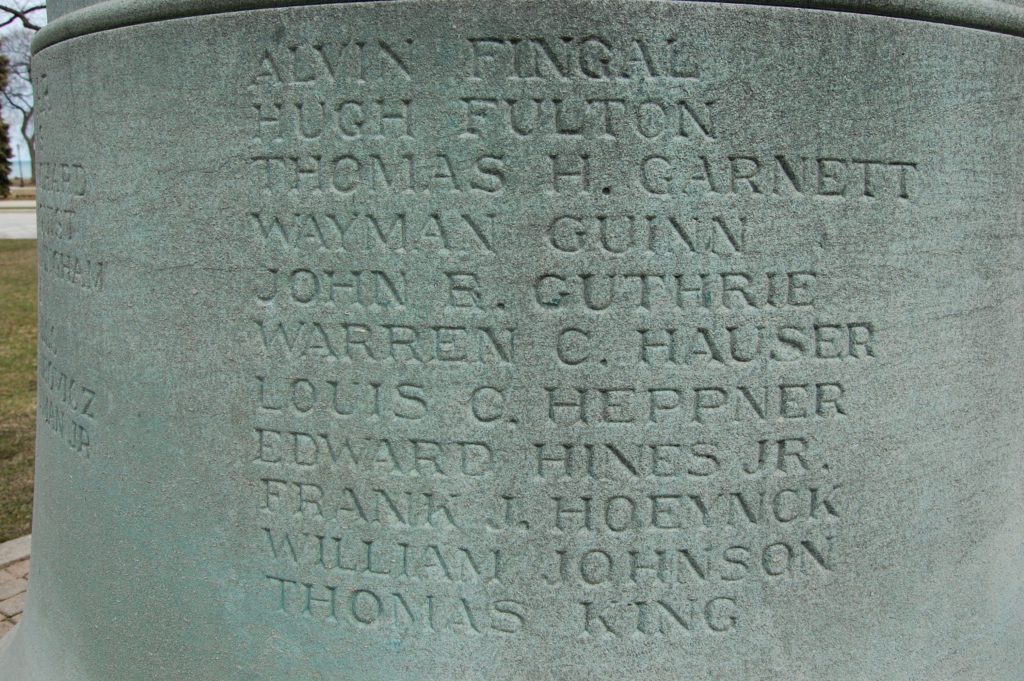 At a bend in the road, just before Forest Place intersects with Davis Street, lies a small, unassuming park once known as Bell Park. Lake Michigan laps at the shores nearby, just across Sheridan Road which borders the quiet, peaceful park called Patriots Park. It is a place of deep meaning. Here stands the Evanston War Memorial dedicated in 1929.

An American flag flies from the memorial; a frieze of figures wraps around its center. Soldiers march, circling around the memorial in perpetuity. There is the goddess Athena, carrying her shield and olive branches. At the memorial’s base, the names of Evanston residents who died in the American Civil War, the Spanish American War and World War I are engraved.

Thomas B. Van Every

In May 1929,  the Evanston chapter of the Daughters of the American Revolution (known as the Fort Dearborn Chapter, formed in 1894) petitioned the city to change the name of Bell Park in preparation for the unveiling of an important civic monument: the Evanston War Memorial. The members had pledged a gift of a war memorial to the city as a “tribute to the men of Evanston who fell in the great war.”[1]

Evanston residents had first proposed the idea of a Great War memorial in 1919. Evanston was in step with hundreds of other municipalities seeking some tangible, permanent form to memorialize the war dead in the war’s wake. After the declaration of the armistice on November 11, 1918, and as American troops and personnel began their journey back home throughout early 1919, various ideas circulated as to how best to honor the memory of those who would not return home. The nation was not only still reeling the wake of the momentous changes and heart rending losses the war elicited, but for many grieving families, whose loved ones lay buried thousands of miles away, the sense of absence was profound. Evanston, like cities across the country, was in mourning.

Memorializing war was nothing new; every war brings with it an effort to give permanent form to its memory and the meanings associated with sacrifice and loss. But in the case of the Great War, with its staggering casualty figures, the sense of loss had reached a new, acute level. A total of well over thirty million soldiers had been killed or wounded. Nearly 60% of all soldiers of all nations were either killed, wounded, died of disease or accident, were taken prisoner, or went missing. Ultimately, 320,710 casualties were counted among the Americans, with 53,402 killed in combat and 63,114 dying from disease or other causes. A total of 205,000 were wounded.[2]

After numerous delays, the Evanston War Memorial was dedicated on July 4, 1929. The final memorial was a pared down version of earlier designs. Initially, the memorial was conceived as much more elaborate, with a large plaza surrounding the memorial itself, to be used in “patriotic and civic celebrations.”[3] The initial design had been “developed with the cooperation of Wallace R. Lane and others, [was] the product of the collaboration with Thomas E. Tallmadge, Dwight H. Perkins, and Hubert Burnham, all members of the American Institute of Architects, with whom consulted Herman McNeal, sculptor, and the late Henry Bacon of New York, creator of the famous Lincoln Memorial at Washington.” 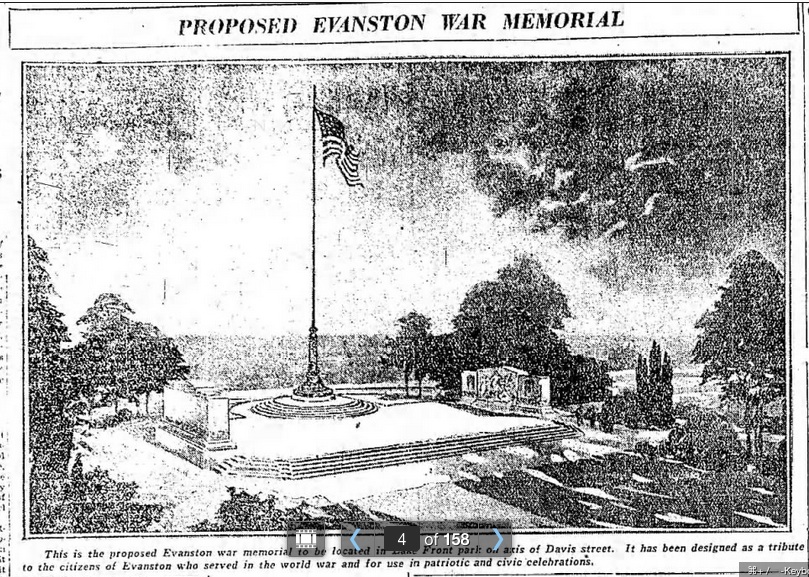 The memorial’s sculptor, Stephen Beames, asked various Evanston residents to pose for the figures on the memorial.

The Evanston War Memorial exemplifies a common style and intention of the war’s “collective memory in the interwar years.”[4] Most memorials erected in the 1920s were funded by local groups, particularly women’s and veterans organizations, in an effort to “ease the anxieties” wrought by both the war’s impact and the contemporary landscape, as historian Jennifer Wingate argues. Rather than “dwelling on the uncertain causes or outcomes of the war,” these memorials sought to commemorate the “common” soldier and individual.[5] They were strictly “heroic” in nature, emphasizing both the greater ideals that had been associated with the war (liberty, democracy) as well as the idea that war was but a continuation of human history, hence the inclusion of the names of the city’s residents who had died in the American Civil War, the Spanish American War and the Great War. (For a contrasting examples of a war memorial that emphasizes loss over heroism, see Maya Lin’s discussion of her design for the Vietnam War memorial. http://www.nybooks.com/articles/2000/11/02/making-the-memorial/) 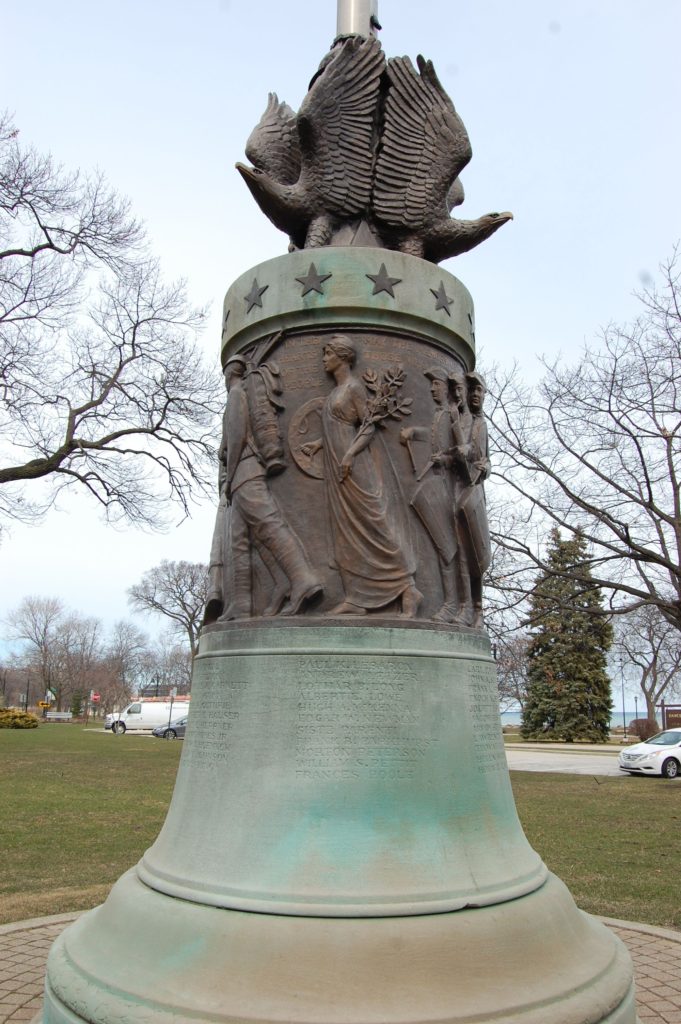 The Evanston War Memorial, erected during the decade of uncertainty that followed the war, when fears of other wars, an unstable economy, “red scares,” and a host of recriminations and investigations concerning the ways that the war had been fought and funded, seems to rise above the messy reality of the postwar 1920s. And indeed, for families and friends of those who had died in the war, it was imperative that the memory of their loved ones be elevated above a difficult and painful present.

Despite its effort to commemorate the nobility of service, the memorial can also be viewed as a tangible representation of loss; it is an artifact that sprung from grief, from absence. While all of those whose names are inscribed on the memorial died in that war, many would never return home for burial; that is, they would never be laid to rest by their families at home. Many of them are still buried in cemeteries in France. In fact, at the very moment that the memorial was being designed, a movement to “repatriate” America’s “war dead” was underway.