May 1917: The United States had been at war for less than two months when the city of Evanston received the news that one of its residents, Helen Burnett Wood, a nurse who volunteered to serve in World War I, had been killed on board the S.S. Mongolia. The ship, loaded with American medical personnel, had been on its way to France. Another nurse onboard, Edith Ayres from Ohio, was also killed. A third nurse, also from the Chicago area, Emma Matzen, was seriously wounded. The casualties had been caused by an accident during a routine practice of the ship’s guns.

Just days earlier, on Saturday, May 17, 1917, the S.S. Mongolia had set sail from New York harbor in secret. The passengers, all members of the U.S Base Hospital No. 12, included twenty-three physicians, sixty-five nurses, and 153 enlisted men. The hospital unit was known as the Northwestern University Base Hospital, since a majority of its personnel were connected with the university. It was the first American hospital unit to be dispatched to the war.

In the spring of 1917, Helen Wood prepared for her transatlantic journey with great anticipation. She had been working as a nurse for three years since earning her nursing degree from the Evanston Training School for Nurses in 1914.

Upon U.S. entry into war in April 1917, there were only 403 U.S. Army nurses on active duty. Wood would be among the earliest group to volunteer to serve. By the end of the war, roughly 21,000 nurses served with the Red Cross, the U.S. Navy, and the U.S. Army, with about half of that number going overseas to serve alongside the American and Allied military units. Neither given military rank nor commissioned as officers, these women were brave and intrepid volunteers during a time of war. Their stories reverberate still.

At the time of her death, Wood had been living in Evanston for several years. She was born in 1888 in Portobello, Scotland, and grew up in Musselburgh, Scotland. She was the oldest of three sisters and three brothers. Before the war, she immigrated to the U.S and settled in Evanston. She worked as a telephone operator. But she dreamed of becoming a nurse. 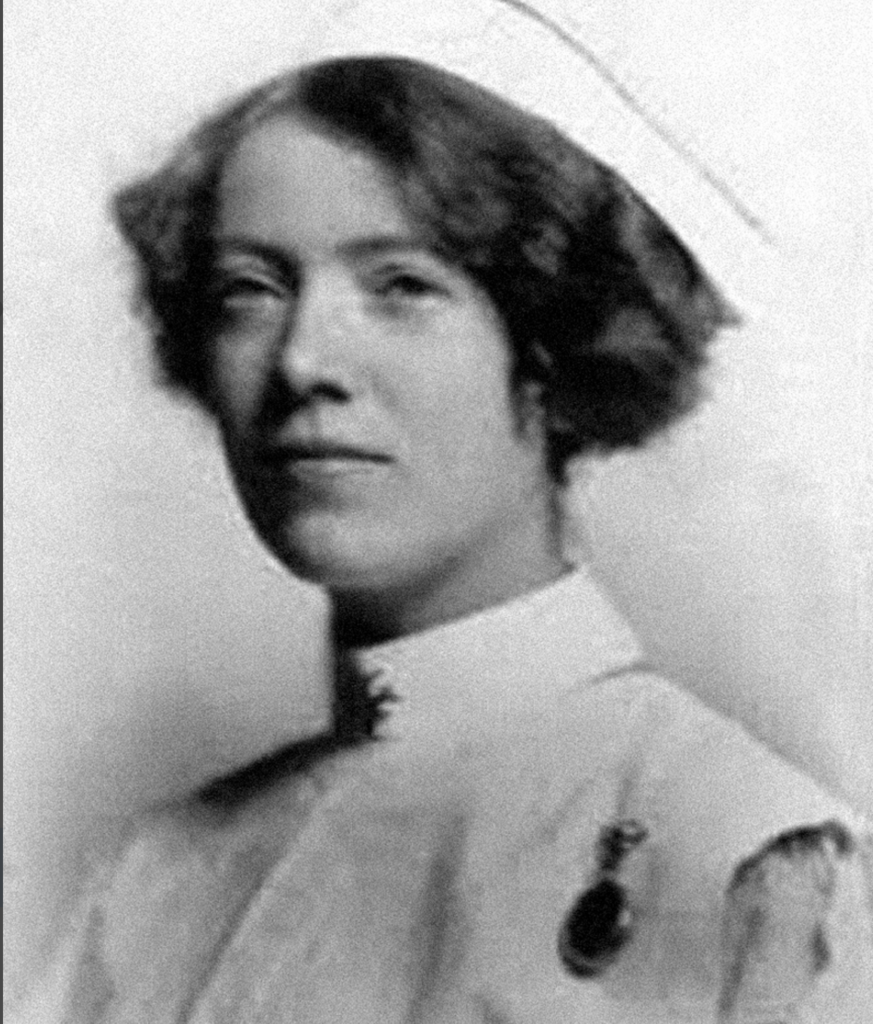 Helen Wood in her nurse’s uniform.

By 1917, the war had taken a heavy toll on the Wood family: Helen’s brother, William Wood, served with the 5th Royal Scots. He was killed in action on June 28, 1915, at Gallipoli. Another brother, Johnson Wood, was seriously wounded.

As these tragedies befell her family, Wood was far from home. Upon the U.S. entry into the war, she wanted to do her part to help those in need, and so she elected to go overseas.

Her sister Annie later told the Chicago Tribune: “I didn’t want Helen to go, but she said if her brothers could risk their lives for Britain, she could risk hers for America.”

Wood was attached to the U.S. Army Base Hospital, No. 12, also known as the Northwestern University Base Hospital, since a majority of its personnel came out of the university.

In the spring of 1917, just a month after the U.S. entered the war, Wood received her official orders to join the Base Hospital staff on its way to New York where the staff would embark for Europe.

On May 20, 1917, one day after the ship set sail from New York, one of the ship’s guns exploded during a practice drill, sending a shower of shell fragments across the deck. Helen Wood and Edith Ayres, two of the 65 nurses on board were killed, and one nurse, Emma Matzen, was wounded. Immediately, the ship turned around and sailed back to port, its flag flying at half staff. These two nurses were among the first Americans to die in World War I. 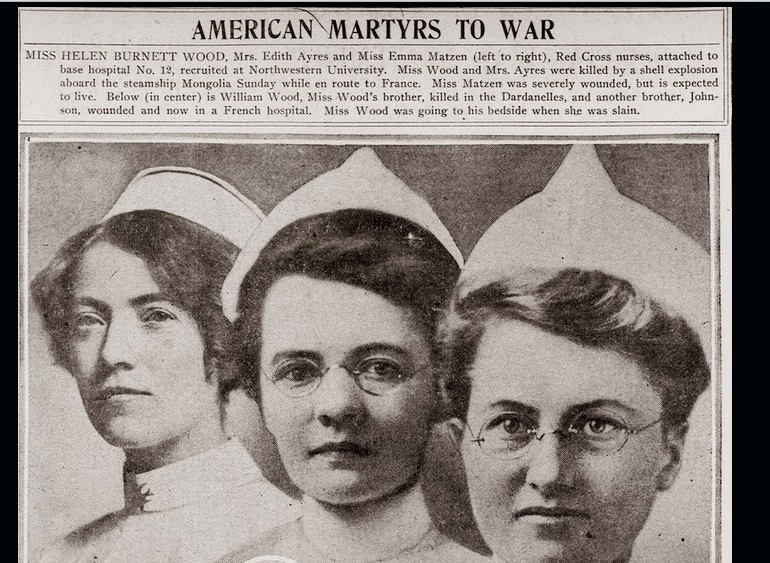 There was widespread horror and outrage following the accident. Soon, an inquiry was launched. The text of the inquiry can be found here.

Helen Burnett Wood’s body was brought back to Chicago:

At Union Station her body was met by a delegation including people from both Chicago and Evanston. It was headed by John W. Scott, Vice president of the Chicago Chapter of the Illinois Branch of the American Red Cross. From the station the body was taken to Helen’s home in Evanston. Friends requested that rather than flowers, donations be sent to her aging parents in Scotland. On Saturday 26 May the coffin was escorted by fifty blue jackets from the Great Lakes Training Center and by fifty automobiles containing representatives of the Red Cross, the medical reserve corps, the city of Evanston, friends and relatives. The somber procession proceeded from her home on Sheridan Road to the First Presbyterian Church. Outside the church stood an honor guard of fifty Red Cross Nurses, fifty students from Northwestern University wearing black gowns and capes, fifty nurses from Evanston Hospital, and twenty-five uniformed members of the Grand Army of the Republic. Clergymen from three different denominations, Presbyterian, Methodist, and Baptist, offered prayers, and the president of the Chicago chapter of the American Red Cross expressed his sympathy. “

Upon news of her death, mourners were asked to donate funds to help her parents. Now, two of their children were gone.

Wood’s funeral was held at Evanston’s First Presbyterian Church. She was buried at Rosehill Cemetery in Chicago.

At Northesk Parish Church in Musselburgh, Scotland, near Wood’s family home, a memorial plaque lists Helen  Burnett Wood’s name. She is listed at the top of the plaque, the only woman. Her brother William is also listed on the very same plaque.

At the outset of the centennials of World War I in 2017, Wood’s relatives in Scotland began to re-tell her story, proudly, and with awe.

In the fall of 2021, two American flags were flown over the U.S. Capitol in Washington, D.C. They were flown in honor of the service and sacrifice of Helen Burnett Wood (1888-1917). One flag came to Evanston, Illinois, where Wood lived from 1909-1917, and the other made its way across the Atlantic Ocean to Musselburgh, Scotland, Wood’s hometown.

The honor was made possible by U.S. Senator from Illinois, Tammy Duckworth.
The Evanston History Center is currently compiling a more detailed biography of Wood, which will soon be released.