“How did the Depression affect your job?”

“How far from home was the grammar school your children attended in Evanston?”

“When did you first notice a Black community being formed on the West Side of Evanston?”

The story of the Great Depression may be told in history books, but how did real people in Evanston live within and react to this historical event? This was just one of the questions that Wayne Watson focused on answering when he was a graduate student in the College of Education at Northwestern University in the early 1970s. Answering this and other similar questions was particularly important for Black students, Watson believed. While in school, Black students were too often disconnected from their own communities. They were “forced to live in two worlds,” Watson argued, the worlds of their own neighborhoods, the people they knew, the life around them, and their schools, where what they were taught did not necessarily seem to be connected to their own lives. The world of school was “a world which yields to no true self-consciousness,” Watson asserted, evoking the words of W.E.B. DuBois in The Souls of Black Folk. The impact of such a disconnection could result in “confusion and low self esteem.”[2]

As Watson began working on his dissertation, he tackled this problem. He was developing a way to bridge those worlds, a means to make history meaningful to students and to allow students themselves to bring history “to life.”[3]

For Watson, this was more than just a project. It was about empowerment. Students “should be allowed to discuss and interpret historical or sociological data instead of always relying on an author or teacher to interpret it,” Watson argued.[4] After all, history too often existed only within the realm of “experts” and professional historians. He wanted to show young students that they could uncover the history that existed within the memories of their relatives and members of their own community, specifically through focusing on recording the oral histories of their elders. The “common” person’s story, uncovered by the students directly, would mean that history was no longer only written “by the elite and from their perspectives.” [5]

Watson developed a system called the “Social Science Curriculum Model.” The model incorporated three research areas: oral history, genealogical analysis (family tree), and newspaper analysis. Not only could the model be used to uncover important local historical data, but that data could then be used by teachers and administrators in their efforts to teach, connect, and understand their students. The data was intended to enhance the historical record and to connect history to students, students to community, and educators to both. “After a period of time,” Watson wrote, “the community will be viewed by the educational institution as a valuable resource, and the educational institution will be viewed by the community in the same way.”[6]

“To take a student’s life experiences and tie them into his educational experience is to tell him that his community, his family and his life have some value.”[7]

Over several years, Watson, along with ETHS students and some Northwestern students, would record over one hundred oral history interviews with Evanston’s Black residents, many of whom had memories of Evanston that stretched back into the 1880s and 1890s. They also conducted research into the historical eras and the lives of their subjects, amassing data from a variety of primary sources. Part of the project involved careful readings of local newspapers, including two local Black newspapers, the Evanston Newsette and The Afro-American Budget, in order to “index the accounts of Black residents recorded in Evanston newspapers.”[8] “We recorded the history of Evanston,” Watson said in a recent conversation with me, “not with the white establishment of Evanston, but the Black community of Evanston.”[9] 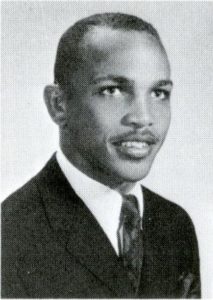 Watson developed his model for oral history and used it at ETHS. At Northwestern University, Watson received three degrees: a B.A. in 1968; an M.A. in 1970; and a PhD in education administration in 1972. He later served as a professor at Shaw University and as chancellor of the City Colleges of Chicago.

Watch Wayne Watson explain his use of oral history as a method in an interview by the History Makers.

When it came time to defend his dissertation, the dean of the College of Education, B.J. Chandler, wanted to invite representatives from eight departments within three colleges at the university to attend. Watson’s work was groundbreaking, and its truly multi-disciplinary and innovative approach, Chandler believed, should be presented to those within other disciplines who could benefit from hearing about his work.

Watson was “petrified,” he recalled, now having to defend his work to more than those on his dissertation committee. He knew that some considered his work “controversial” for a number of reasons. First, as he explained, his dissertation may have constituted the first time that a history had been compiled that documented Evanston’s Black community and the racism and segregation many residents had experienced.[10] And second, his work challenged some of the tenets of historical research versus anthropological research. Ultimately, Watson’s defense was successful and he graduated with his PhD in June 1972.

The interviews that Watson and his team recorded are invaluable. The residents they talked with had memories of the city that spanned eight to nine decades. They had raised families in Evanston. They worked in Evanston. They remembered houses and buildings, schools and businesses that were no longer extant. They recalled their education, their families, neighbors, and friends, local and national politics, their gardens, food, recreation, and scores of other topics. Together these interviews paint a vivid picture of the city.

Among those people recorded by Watson and his team in the early 1970s are:

Homer Fleetwood (1902-1990), namesake of the Fleetwood-Jourdain Community Center. Fleetwood was just three months old when he and his mother Mary Perkins Fleetwood (1876-1934) moved to Evanston from Rome, Georgia. Fleetwood was the first Black student to play on the varsity basketball and baseball teams at ETHS and the first Black player on Northwestern University’s basketball and baseball teams. He later worked as the director of recreation for the Foster Park neighborhood.

Henrietta Butler Taylor (1893-c. 1985) lived her entire life in Evanston. Her grandparents moved to Evanston from Kenosha, Wisconsin, around 1880. Taylor’s white grandmother, Barbara Blankenheim (1831-1916) was an immigrant from Germany. Her grandfather, Cornelius Hope Butler (1821-1892) was Black and Native American; he had served in the American Civil War with the 41st Colored Infantry. After the war, the family settled in South Evanston, purchasing several lots on Sherman Avenue where they would build their home. The family was first recorded on an Evanston census in 1880. 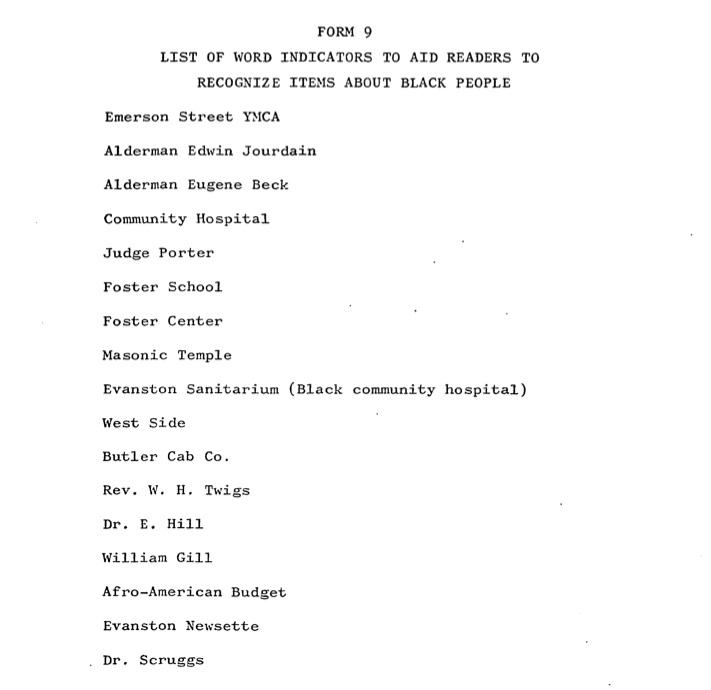 “List of Word Indicators” provided by Wayne Watson for conducting Newspaper Analysis aimed at compiling a history of Black Evanston residents. These were just some of the terms researchers were instructed to look for when reading through local newspapers.[12]

Today, EHC’s oral history collection numbers nearly 500 individual interviews. In 2015, EHC launched a digitization project to transfer interviews in the collection from their original source audio cassettes to MP3 files, for ease of access, and to WAV files, for long-term preservation. The project was funded by a grant from the Illinois State Records Advisory Board (through funding from the National Historical Publications and Records Commission (NHPRC), National Archives and Records Administration).

The staff at EHC looks forward to welcoming back researchers into the research room in the near future!  In the meantime, why not launch your own oral history program at home? Since we are being asked to stay at home, it is a great time to look to those with you (or those you can connect to on the phone) and record memories, life experiences, and more!

Steps to conducting your own oral history interviews at home:

[2] Watson, “The Development of a Model for the Generation of Data for a Social Science Curriculum,” 2.

[6] Watson, “The Development of a Model for the Generation of Data for a Social Science Curriculum,” 11.

[7] Watson, “The Development of a Model for the Generation of Data for a Social Science Curriculum,” 4.

[8] Watson, “The Development of a Model for the Generation of Data for a Social Science Curriculum,” 193.

[11] Watson, “The Development of a Model for the Generation of Data for a Social Science Curriculum,” 146.

[12] Watson, “The Development of a Model for the Generation of Data for a Social Science Curriculum,” 204.