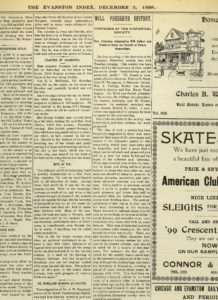 Evanston Index article on the founding of the Evanston Historical Society

The Evanston History Center was founded in 1898 as the Evanston Historical Society (EHS). The seven founders were Harvey B. Hurd, John W. Thompson, J. Seymour Currey, Walter Lee Brown, William A. Philips, Frank R. Grover and Emma Winner Rogers. Collecting began immediately as the founders were concerned that much of Evanston’s early history was being lost with the passage of time, dramatic changes taking place in the community, and the death of the earliest settlers.

In 1907, EHS leased rooms at the Evanston Public Library and for the next few decades, these rooms served as the home for the growing collection and research resources. Retired librarians and community volunteers helped assemble the collection, and create the archives and library for EHS.

In the 1940s, Charles Gates Dawes and EHS trustees began discussing how the Dawes House might be used as a history museum upon his and his wife Caro’s deaths. In 1942 an arrangement was made with Northwestern University where the university would hold the house in trust for EHS, and maintain it with an endowment fund established for this purpose, while EHS operated the house as a museum and stored its collection there.

EHS moved into the Dawes House in 1960 after Charles and Caro Dawes had both died. In the early years, financial support came from the City of Evanston, which leased part of the grounds as a public park, and the Junior League of Evanston, which rented space for its offices in the house. The Junior League also provided the volunteers for the first staff of the house and raised funds for its restoration. 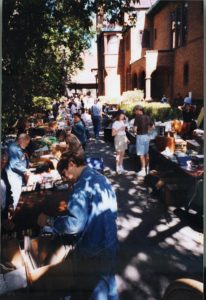 In the succeeding years, EHS slowly gained its financial footing. The EHS Guild grew in importance, and developed programs and events, including the annual flea market (started in 1965), Christmas Open House, and Mother’s Day Housewalk, which raised funds for operations. Professional staff was added as funds became available, and the house was maintained through the work of the EHS trustees and Northwestern University. In 1976 the Charles Gates Dawes House was named a National Historic Landmark.

In 1998, EHS celebrated its 100th anniversary. In 2002, the research room was moved to refurbished rooms in the basement of the Dawes House. Milestones and Memories, the permanent exhibit of Evanston history, opened in 2005. In 2006, the Evanston Historical Society changed its name to the Evanston History Center (EHC). And, in 2009, Northwestern agreed to transfer ownership of the house and a portion of the endowment to EHC.

In recent years, EHC has expanded its role in the community. In 2009, it became home to the Evanston Women’s History Project and hosted an award-winning exhibit on the significant role of Evanston women in the community. In 2013, Evanston celebrated its 150th anniversary and EHC played a lead role in Evanston150, a community-wide visioning project. EHC hosted the Year of Dawes in 2016, marking Charles Gates Dawes’ 150th birthday with a gala celebration, publication of a new biography, and a house-wide exhibit on Dawes and his life as a leader and public servant.