As a collections intern at the Evanston History Center I have had the privilege of working over the last few months with the records of the Dawes Family Collection. I would like to call attention to two artifacts that center around Charles Gates Dawes’s visit to Boston for Patriots’ Day, 1925. I will take this brief opportunity to connect a figure from our local history with the local and state history of the Dawes family in colonial times, Boston, and Massachusetts.

Patriots’ Day, a Massachusetts holiday, was first instituted in 1894. Originally held only on April 19, it celebrated both the Battles of Lexington and Concord on that day in 1775 (“the shot heard round the world”) and the riot in Baltimore on that day in 1861, regarded as the “first blood shed in the war for the Union.”(1) Speaking in Concord on the first Patriots’ Day, Governor Frederic Thomas Greenhalge proclaimed, “I would not limit it by calling it Massachusetts Day, because it is not limited to Massachusetts, but will be taken up by every State and Territory in the Union.”(2) While the holiday never did become nationally celebrated––though Maine did institute it, with the alternate spelling of Patriot’s Day––it marks a state celebration rooted in the birth of the American Revolution. (3)

Today, Patriots’ Day, which is now observed on the third Monday in April, is most closely associated with two events: the early-morning reenactments on the historical battlefields in the western suburbs of Lexington and Concord and the Boston Marathon. The Marathon, which has been held since 1897, runs from the western city of Hopkinton, eventually reaching the major Boston arteries of Commonwealth Avenue and Beacon Street. (4)

(I would add that for me, Patriots’ Day (also known as “Marathon Monday”) has particular salience. As a student at Boston University, it was a special experience to watch Beacon Street get blocked off and to hear the cheering as the first runners came down the course. I recall the often much-needed day off of school in the middle of April––though I was more likely to use it for working on an upcoming paper deadline than to participate in the Bacchanalia for which the day is known among students. Sadly, Patriots’ Day holds for me, as it does for many others, an additional association. In 2013, while I was living on the northern side of the Charles River in Cambridge, a deadly bombing ripped through the crowd near the finish line in Copley Square, tarnishing what had been a day of unity and pride in the city and state and plunging us into a week of community-wide trauma.)

The celebration of 1925 was a special year for Bay Staters, for it marked the 150th anniversary of the battles, also known in upper-level vocabulary as the sesquicentennial. Then in his second month of the vice presidency of the United States, Charles Dawes seemed a worthy dignitary to mark the occasion. Of course, aside from his high place in government, the Vice President’s invitation likely stemmed from what is perhaps the most oft-mentioned fact about Charles Dawes’s ancestry: he was descended from William Dawes, a member of the Massachusetts militia famous for riding from Boston to warn of the regulars’ advance in 1775. (5) For these reasons, the visit appears to have been a momentous occasion in the history of Patriots’ Day celebrations.

Charles and Caro Dawes arrived in Boston on April 17, reportedly in “a most affable mood.” (6) Two days later, Dawes was present at Faneuil Hall (the historic marketplace) as his longtime friend General John J. Pershing decorated Boy Scout Jimmie Smith, who had rescued a man from drowning in a hole in the ice over the Boston Harbor in February, with a medal for bravery. (7) Dawes and Pershing subsequently visited the home of his ancestor William, who worked as a tanner near the famous market. (8) The following day, April 20, the celebratory exercises commenced in earnest. The day began in Eliot Square in the Boston neighborhood of Roxbury. Dawes dispatched the reenactment rider, who was to follow William Dawes’s route to Concord. (9) In the adjacent suburb of Brookline, a Devotion School student named Margaret Stein, dressed as William Dawes’s wife Hannah, presented the Vice President with a pair of gloves belonging to the historical woman. (10) Miss Stein then recited an original poem written by her teacher, Cecile Harris. The poem, told through the voice of Hannah Dawes, included the following:

I’m your great, great grandmother, I’m Hannah Dawes;
I still love a hero, who fights for a cause.
You’ve won many battles, you’ll win many more,
Your courage has come from your kinsman of yore…
So I’ve brought you my gloves as a mascot today,
May they aid in your struggle that right shall hold sway. (11)

At Harvard Square in Cambridge, amid the salutes of bugles, cannons, and thousands of people, Dawes dug a hole for planting an offshoot of the recently dead Washington Elm, attempting to give up his battle with the frozen ground but for the photographers in the crowd. (12) As a spring snow fell over Arlington that morning, another Dawes descendant, Dorothy Dawes of that town, presented the Vice President with a tax bill paid for $1.50 by an ancestor in the eighteenth century; he responded by saying that he could imagine what President Coolidge might say “if he were speaking relative to what the taxes were in years gone by and to what they were today.” (13) In the early afternoon, General Dawes attempted to make an appearance at the commemorative parade in Lexington, but due to its delay from Concord, both he and Pershing left the reviewing stand, unwilling to be drenched by the melting snow atop its canvas. (14) The vice president was able to make a less taxing appearance at the Concord Armory that afternoon, where he was cheered by 2,500 people. (15) 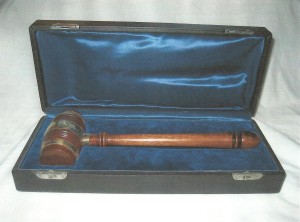 At least two items in the Dawes Collection relate to this celebratory occasion. The first is a gavel made of wood from Faneuil Hall and presented to Dawes by Boston mayor James Curley in the old market on April 19. Mayor Curley told Dawes that he hoped the gavel would allow him “to bear it in on even the senators that there are certain essentials to good government which rise superior to the success of party politics.” (16) Dawes spoke briefly and graciously, calling the gavel precious to me, because it comes from sacred timber––timber from this hall that has been, that is, the great intellectual battleground of America, a place for the establishment of principles through discussion, and my message here is to ask you here to rededicate yourselves––here in this holy place––to the preservation of those principles which your ancestors died to establish. (17) 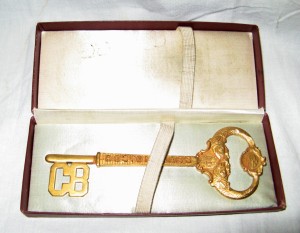 The second item is a gold Key to the City of Boston. The elegant key, whose bow forms the letters “CB” for City of Boston and has the words “Boston, Mass” engraved on its shaft, features the Old North Church in its handle’s design work, the building where Paul Revere ordered two lanterns hung to warn of the attack by British regulars on April 18, 1775. (18) Keys to the City of Boston were also presented that year by Mayor Curley to the Belgian ambassador and the Chinese consul general. (19)

In this event, we see the intersection of our own local history, embodied in one of Evanston’s most famous individuals, with not only the local history of Boston and the state history of Massachusetts in celebrating their role in the American Revolution, but with federal history in the visit of a Vice President of the United States to an institutionalization of our national narrative. Through our local collection, based largely on events and lives of the late nineteenth and early twentieth century, we can relate, admittedly through several levels of mediation, to events that took place hundreds of miles away at the time of our nation’s inception.