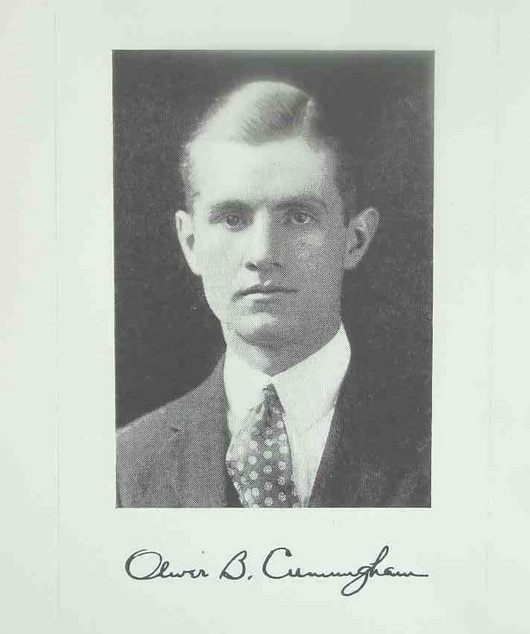 In 1918, Frank Cunningham became president of the company and also served as a trustee of Northwestern University. He was also a founder of the Cradle Society, an adoption agency in Evanston, and served as its president from 1920 until his death in 1941.

In 1913, Oliver Cunningham entered Yale University. There he served as an associate editor at the Yale News, and was a member of the Dramatic Association and the Hill School Club.

Cunningham also served as a member of the Yale Battery and as an artillery private in the Connecticut National Guard in 1916. In February 1917, he filled out a state military census form where he noted that while he could not drive an automobile, he did know how to ride a horse.

In 1917, Cunningham graduated with highest honors from Yale, winning the prestigious Francis Gordon Brown Prize. He was admitted to the Officers Training Camp at Fort Sheridan and received a commission as a 2nd lieutenant in the Field Artillery. He would later rise to the rank of captain. On December 12, 1917, he sailed for France with the 15th Field Artillery, a unit of the 2nd Division.[1]

After training, the unit took part in several major battles, including Chateau Thierry, Vaux, and Belleau Wood. In September 1918, his unit also took part in the Battle of St. Mihiel, which included a battle to recapture the French town of Thiaucourt, which had been in German hands for four years. The Americans first took hold of the town on September 12, but a brutal fight was in store for them.

See footage of the town amidst the battle that ensued here.

On his 24th birthday, September 17, 1918, Cunningham was killed near Jaulny, France, just a few miles from Thiaucourt.

He was hastily buried in a makeshift grave, as was the custom for those who died in the midst of the battles raging along the Western Front.

For his bravery in action, Cunningham was posthumously awarded the Distinguished Service Cross. The citation reads:

“The President of the United States of America, authorized by Act of Congress, July 9, 1918, takes pride in presenting the Distinguished Service Cross (Posthumously) to Captain (Field Artillery) Oliver B. Cunningham, United States Army, for repeated acts of extraordinary heroism in action while serving with 15th Field Artillery, 2d Division, A.E.F., near Villemontoire, Chateau-Thierry, and St. Mihiel, France, 21 July 1918, to 17 September 1918. During this period Captain Cunningham, with utter disregard for his personal safety, on numerous occasions exposed himself to the enemy fire while reconnoitering arid performing liaison work. On 17 September while at his post as liaison officer with the most advanced infantry unit, Captain Cunningham was killed by an enemy shell.”

In the wake of her only child’s death, Oliver’s mother, Lucy Cunningham, made the journey to Thiaucourt, France, after the war. The town had been decimated by the fighting and Mrs. Cunningham donated money to the town and for “the reconstruction of the town hall that had been reduced to rubble.”

In 1922, Cunningham’s grave was exhumed. Along with 4,153 other American soldiers, he was then laid to rest in the 40-acre, St. Mihiel American Cemetery. His gravesite is located at Plot C Row 13, Grave 18.

The business colleagues of Oliver’s father provided funds for the local parish church in Thiaucourt for the purchase of three new church bells, hung in memory of Oliver Cunningham. The original bells had been melted down for metal during the war. The new bells were dedicated on May 30, 1924.

Inside the church, a memorial plaque honors Cunningham.

In the aftermath of the war, Lucy and Frank Cunningham worried that because the St. Mihiel cemetery where their son was buried was so far off the beaten path– “a night’s ride by rail” from Paris— America’s fallen sons who were buried there were being overlooked. Official commemorations were regularly held in American military cemeteries nearer to Paris. And so Mr. Cunningham took it upon himself to try to bring attention to the cemetery where his son’s grave was located. Writing to the U.S. ambassador in France, he stated:

“I have reason to know that a number of American fathers and mothers whose sons are buried at Thaucourt [sic] have been hurt by this unintential oversight.”[2]

American officials took Cunningham’s message to heart and sought to call attention to the American cemetery at St. Mihiel. They also held official commemorative events in the nearby town.

In 1925, the dedication of a new memorial sculpture near the church in Thiaucourt was attended by some of France’s most high-ranking government officials and the U.S. ambassador. The memorial depicts two soldiers, French and American, shaking hands. The memorial included the “names of the men of Thiaucourt who died for France and of the American divisions who had a part in the delivery of the town. . . engraved on the monument in gold plate letters.” [3] The figure of the American soldier was modeled after Oliver B. Cunningham.

Evanston took note of the special memorials for one of its sons.

In 1926, Oliver’s mother, Lucy died. She was laid to rest in Rosehill Cemetery. His father, Frank, would continue to live in Evanston with his sister. He passed away in 1941. At Rosehill Cemetery the family gravesite includes a memorial to their only son, Oliver. “His body rests in France where he fell.”