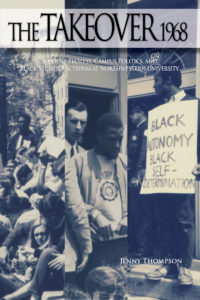 On May 3, 1968, a group of Black students at Northwestern University made headlines when they occupied the university’s main financial building and announced that they would not leave until their demands were met. Their demands, submitted to university officials in April 1968, focused on a range of issues, from campus conditions to the racism they faced at Northwestern. Over the course of two momentous days, the whole world watched as events on the campus unfolded. Drawing from archival sources and interviews with some of the takeover’s key players, the book pieces together the events of May 1968 as they unfolded; it also takes a broader view, stepping back from those two crucial days to examine what led to the takeover and what transpired in its aftermath. (Read an excerpt here.)

Available on Lulu.com. All proceeds benefit the Evanston History Center.

Charles Gates Dawes: A Life
by Annette B. Dunlap 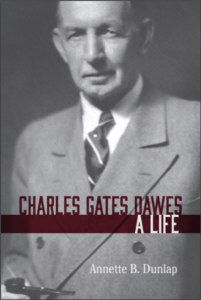 “Written with verve and style, and full of new insights from untapped archives, Charles Gates Dawes: A Life will surprise scholars, impress general readers, and shed new light on how modern America came to be.” – Christopher Capozzola, author of Uncle Sam Wants You: World War I and the Making of the Modern American Citizen

Charles Gates Dawes: A Life is the first comprehensive biography of an American in whose fascinating story contemporary readers can follow the struggles and triumphs of early twentieth-century America. Ebullient and irrepressible, Dawes is most known today as vice president of the United States under Calvin Coolidge, but he also distinguished himself and his hometown of Evanston, Illinois, on the world stage with the 1925 Nobel Peace Prize. Annette B. Dunlap recounts the story of this original American who enlightened and enlivened his world.

Charles Gates Dawes: A Life was published in cooperation with Northwestern University Press and with generous support from the Tawani Foundation.

Read more about the book by clicking here.

A Journal of the Great War: The Critical Edition
by Charles Gates Dawes 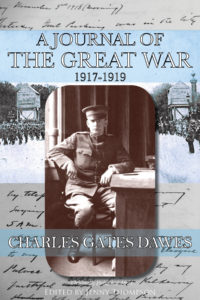 First published in 1921, A Journal of the Great War provides a fascinating glimpse into the challenges faced by the American Expeditionary Forces (AEF) during the United States’ 18-month involvement in World War I. Dawes’ journal, written while he was stationed in France from August 1917 to July 1919, offers a behind-the-scenes look at the power struggles and political maneuvering that took place among American and European political and military leaders as they sought to fight the war as an allied force. Part document of life in wartime France, part war diary, and part mentation on the means of exercising power, Dawes’ journal is a unique contribution to the literature of World War I.

The new edition, edited by Jenny Thompson, includes two new essays, photographs, and more. It is now available on Lulu.com. The price is $25 plus shipping. All proceeds benefit the Evanston History Center.

Read more about the book by clicking here.

Timelines is the member newsletter, which is sent to membership bi-annually. Past issues can be viewed with the links below.