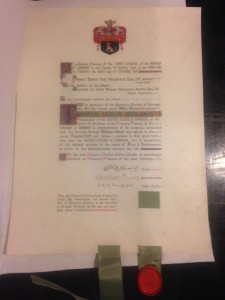 “Thus from Sudbury stock descended one of America’s leading citizens, a man who has made his mark in the world, and who is striving strenuously for world peace.”

It’s no secret around 225 Greenwood that Charles Gates Dawes was the great-great-grandson of William Dawes of St. Ann Street in Boston, Massachusetts. William Dawes was a tanner who rose to fame in his midnight ride on the night of April 18-19, 1775, when he and Samuel Prescott rode from Boston to Concord to warn the militia of the advance of the British regulars. (1) However, Dawes’s lineage goes back to two other Williams, tying him, like all Americans, across the sea.

The second of the two Williams was born in Sudbury, in the borough of Suffolk, England, in 1620.(2) According to Charles’s recounting of the family history, he came to New England at the age of fifteen, residing first in the new settlement of Braintree after marrying Susanna Mills, then in the house in Boston where the Revolutionary hero would be born several generations later. (3)

William Dawes’s father, also named William, evidently crossed the Atlantic in 1628 along with his wife and John Winthrop, the future governor of Massachusetts Bay Colony, although the couple returned to Sudbury the following year for undetermined reasons. (4) Research performed during Dawes’s lifetime indicated that the family had a connection to Newton, a small town in Suffolk borough, and were supporters of the Congregational Church, which in that time was embroiled in the religious and political turmoil that both encouraged Pilgrim migration and fueled the English Civil War. (5) It appears that of the major wave of English settlers in Massachusetts Bay Colony who immigrated in the 1630s, approximately 2,000 were from Sudbury and the surrounding area, such that Governor Winthrop referred to it as the “great Suffolk migration.” (6)

In early July, the Sudbury Town Council voted to confer upon U.S. Ambassador Charles Dawes the Freedom of the Borough. (7) The honorary admittance as freeman “to any persons of distinction and any persons who have rendered eminent services to the borough” was a relatively new ceremonial tradition in British law, from the end of the nineteenth century. (8) This particular conference of the honor was reportedly “in recognition of the fact that [Dawes’s] ancestors lived for countless generations within [Sudbury’s] humble borders.” (9) The regional press noted that “the honorary freedom of Sudbury is not bestowed lightly; in the last thirty years only two people have received it,” both of them war heroes. (10) The date was set for October 1. (11)

Later in the summer, researchers in Sudbury reportedly made a connection in August between the William Daweses of Sudbury and Abraham Dawes of Putney, who made a baronet in the mid-1600s. (12) “The American Dawes family,” one report claimed, “has long had the right to use the coat of arms,” which featured three swans on a bend in a field of battle axes. (13)

Amid much fanfare for a small market town, Charles and Caro Dawes arrived on October 1 and the ambassador signed the roster of honorary freemen of the borough (14). He mentioned that “from the record of the English and American families of Dawes, it would seem that in the War of the American Revolution, there was an English Dawes in the British Army and there fought an American Dawes in the American Army, but all that is past, for their two countries now, under the providence of God, together are fighting a battle for world’s peace.” (15) In closing his remarks to the townspeople, Dawes told them, “The memory of this occasion and this beautiful and historic city and of you yourselves will always be one of the most cherished of my life.” (16)

Dawes received the scroll declaring him a freeman of Sudbury with a 500-year-old seal now in the possession of the EHC; Caro was presented with a handmade cushion made in Sudbury and a model Stuart-era room with miniature furniture of the period from P. S. Head’s furniture shop (some of which is currently visible in the Research Room). (17) At a nearby church, Dawes was shown a baptismal record of Matthew Dawes, son of Jacob, born in 1593. (18) Charles and Caro, along with the mayor, shared a drink from a loving cup emblazoned with the Sudbury arms. (19)

In this brief episode in a life crowded with pageantry and honors, we see not only an interest in one’s origins, but a reverence for them. We should all be so lucky to trace back our family history, to discover and engage in a very personal past, whether or not we find a connection to an historical figure whose name has been enshrined in the Revolutionary narrative alongside fellow Bostonian Paul Revere.

(8) “The Honorary Freedom of Boroughs Act, 1885,” in John F. P. Rawlinson and J. A. Johnston, eds, The Municipal Corporations Acts and Other Enactments Relating to the Powers and Duties of Municipal Corporations Thereunder, with Notes and References to the Cases Thereon (London:Sweet & Maxwell, Ltd., 1903), 397.

(13) Ibid. The coat of arms is viewable at this and other websites: <https://www.houseofnames.com/dawes-