“We Shall Take No Golf Clubs”: Charles Gates Dawes and the Dominican Mission, 1929
Written by Jacob Slutsky, EHC Intern.

As I have continued my work researching unlabeled items in the Evanston History Center’s artifact collection, I came across a curious artifact from 1929. Primarily made of fine wood in a square, almost book-like shape, it contained not only a piece of artistic stone in its front, but official-looking, typed material on its back, affixed behind glass backing. Much of its heavily notarized text was in Spanish, and it made reference to the Caribbean nation of the Dominican Republic. Suspecting this object to be related to the life of Charles Dawes, I quickly began researching the connection between one of Evanston’s most famous residents and the Dominican Republic. 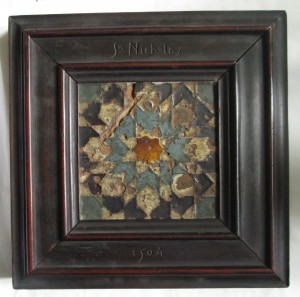 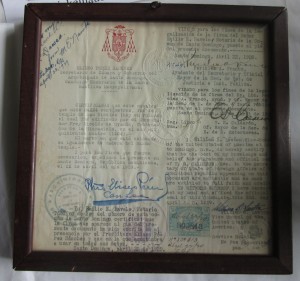 One of the first sources I encountered spoke generously of an economic plan with which I was unfamiliar. “The term ‘Plan Dawes,’ under which the [Dominican] Government now operates, relatively is as well known and discussed in this small Caribbean country as [the European Dawes Plan],” a U.S. report on  its customs receivership of the Dominican Republic (see below) stated in 1930 (1). Given this treatment, it is surprising that such an episode between one of our city’s most famous citizens and a sovereign nation, so brief as it might have been, has slipped through the cracks of historical memory.

The typical narrative of the life of Charles Dawes often omits this moment of his participation in international relations on behalf of the United States. Whether at 225 Greenwood or in the pages of the Encyclopedia Britannica, the listing of Dawes’s achievements at the national level comprise his roles as Director of Budget in 1921; as part of the Allied Reparations Committee in 1923-1924; naturally, as thirtieth Vice President of the United States from 1925-1929; and as Ambassador to the Court of St. James (the United Kingdom) from 1929-1932. (2) Few biographical sources appear to mention the short gap between the end of his vice-presidential term, March 4, 1929, and the announcement by the White House of his appointment to the ambassadorship on April 10. (3) Dawes’s biographical article on the website of the Nobel Foundation explicitly mentions his role in the United States Mission to the Dominican Republic, but as merely a single credit in his many years of public service, with little elaboration or context. (4) Let us commence with rectifying this gap, through telling the story of the United States and the Dominican Republic, at the center of which General Dawes found himself only days after his term as Vice President of the United States had ended.

The United States’ involvement with the Dominican Republic (DR), like with other Caribbean nations, is tied to the President Theodore Roosevelt’s Corollary to the Monroe Doctrine and President Taft’s policy of “dollar diplomacy.” The Roosevelt Corollary of the first years of the twentieth century stated that, in order to keep European influence out of the Western Hemisphere, the U.S. would intervene to “correct the fiscal irresponsibilities of the local states and maintain political order through the exercise of international police power.” (5) In the next decade, “dollar diplomacy” would involve the flow of U.S. capital into indebted Caribbean nations, and occasional military intervention intended to ensure the stability necessary for those investments (the products of which, unsurprisingly, benefitted American investors). (6)

At the beginning of the twentieth century, the DR was heavily in debt to many Western European nations. In an effort to prevent European economic intrusion, the U.S. loaned the DR a substantial sum to cover these foreign debts; to guarantee repayment, it established a customs receivership over the DR in 1905. (7) This economic intervention was followed eight years later by a military occupation, installing a pro-American government. (8) Like many other states, the DR’s economy suffered in the 1920s. Its debt, standing at $45,661,300 in 1926 (nearly $603 million in 2015 dollars), had not abated, having continued to receive loans from the U.S. government, which was still extracting fifty-five percent of the proceeds from customs duties. (9) Moreover, the annual budget deficit had grown to over $4.1 million (in today’s money, over $56 million). (10)

During this time, Charles Dawes had already gained international prominence due to his efforts in building an effective schedule of German war reparations and had spent decades in business ventures. President Horacio Vásquez invited Dawes, in his own words, “to come to this country to recommend methods of improvement in our economic and financial administrative organization, both national and municipal; for the installation of a scientific budget system; and for an efficient method whereby which the Government may control all of its expenditures.” (11)

Acting as a private citizen and paying his own expenses, Dawes left Evanston on March 25 for New York, from which he set sail on the Coamo on March 28. (12) In a statement shortly before leaving, Dawes promised efficiency, observing, “we shall take no golf clubs.” (13)

Arriving on April 3, the mission, comprised of several other prominent business and budget-planning figures, began their task of analyzing and reorganizing the government finances. In an address to Vásquez’s cabinet, Dawes emphasized that the goal of the mission was to implement at system that would ensure that the Dominican government could recover its own customs collection from the United States. (14) The American mission found themselves in the middle of a factious government, in which the opposition initially insisted that the Americans were trying to secure another U.S. loan, continuing a pattern of intervention, despite Dawes’s explicit statement that “Economy does not mean another loan. It is what makes loans unnecessary.” (15) News reports indicate that Dawes navigated the tight diplomatic space with grace, “restrict[ing] economy and efficiency to the future without passing judgment on the operations of the past.” (16) In patiently dealing with the key opposition members, it seems Dawes was able to placate concerns during the drafting process. (17)

Such tactful diplomacy was quite apropos. In the midst of the mission, Dawes was notified of his official appointment on April 10 as Ambassador to the United Kingdom, which had been intimated to him when he left office. (18) Of the acceptance, Dawes said briefly that he was “appreciative of the high done me and recognize the responsibilities which it involves.” (19)

Dawes may not have brought his golf clubs, but at one point, while a Dominican servant at the mission residence was playing a record of the recent hit song, “Ramona,” General Dawes reportedly came in, reset the record at the beginning, and accompanied the recording on piano. (20)

On April 23, the mission presented its two-hundred-page report to the DR cabinet, recommending, among other provisions, a reorganization of the DR’s executive departments, a new budget act, and several new finance laws. (21) The members of the mission boarded a ship and set sail for the U.S. the following day. (22) Arriving back in New York on April 29, Dawes issued a statement on the efforts of the mission and his plans to spend a couple of weeks making arrangements at home before returning east to cross the Atlantic. (23) Regarding his appointment, and perhaps all his work, Dawes said, “I remember the old Spanish saying[:] ‘It is not the applause on entrance but on exit which is important,’ and I am keeping humble in mind.” (24)

The curious artifact from the Dominican Republic points to the nation’s gratitude for the American Mission. It contains, according to the short letter bearing the header and signature of Eliseo Perez Sanchez, government secretary to the Archbishop of Santo Domingo, a piece stone measuring 24 by 24 centimeters, covered by mosaic tiles coming from the Church of San Nicolas, built in 1504 and later destroyed. The statement of provenance is endorsed and notarized by other Dominican officials, along with William B. Lawton, Vice Consul to the DR. The letters all bear the date of April 22, indicating planning on behalf of the Dominican government in developing a meaningful gift for Ambassador-to-be Dawes.

Some scholars have criticized the mission, claiming that it, like other American financial missions to the Caribbean, often “displayed a parochial vision that assumed reform simply meant copying American techniques” (25). While I will leave others more informed in Caribbean history to consider this point, it does appear that, even if the efforts were parochial or uninspired vision beyond the concept of a balanced budget, the Dawes mission’s efforts may be considered noble, in that they attempted to help the country stand on its own and take control of its fiscal destiny. While the American presence in the Caribbean may not have originated beneficently, in this instance, we have men of privilege using their knowledge and experience for benefit beyond their own. Such a task, so easily overlooked in the pages of history, ought not to be forgotten.